In my last article, I’ve tried to compare several silhouette 3 starships from the Star Wars universe within Fantasy Flight Games RPG systems that are capable of a longer hyperdrive travel and can accommodate a minimum of two persons on board. One of them was HWK-290 Light Freighter – not the cheapest choice, but my personal favourite. I do not really have a good reason for that, I’ve never played Star Wars: Dark Forces, and this is where it was introduced, so I do not have my sentiments there. I guess I just like the lines of it, and the concept of a very small, yet a bit more elegant craft, that would give you some degree of independence.

The problem with HWK-290, however, is that there are multiple visions of how does it look like inside, how many persons it can accommodate, can you expect cabins, flashy corridors, or maybe it is more like an interior of U-96 submarine.

On the next pages of this entry I will try to dig through the limited official and more frequent not so official materials we have on HWK-290 and figure out, what version would match the FFG specs we have best.

First of all, let’s start from the official Force and Destiny stat block: 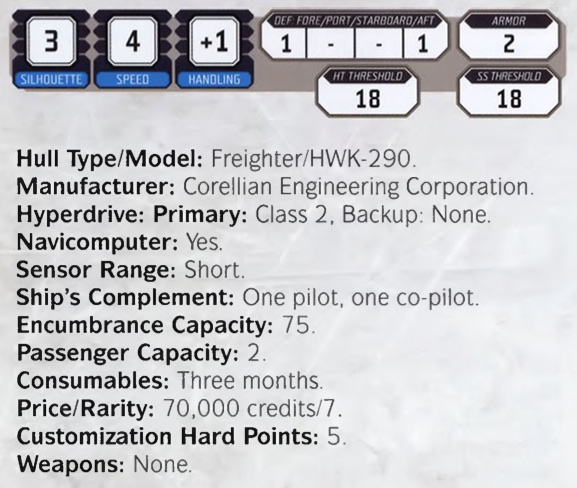 The statistics list it as a silhouette 3 ship. The same silhouette are having pretty much all of the fighters, the ships we were discussing in the last article, and a lifeboat. The length of the X-Wing fighter is 12.5 meters, and a B-Wing – also a silhouette 3 – has almost 17 meters. GAT-12H Skipray Blastboat is 25 meters long, but it jumped to silhouette 4 category. Judging on that, the boundary between silhouette 3 and 4 could be – length wise – somewhere between 17 and 25 meters.

Let’s browse the sources, then. The wookieepedia article on HWK-290 lists it as 29 meters long, able to carry 6 passengers. That is much more than the above FFG specification in terms of passenger capacity, however, so I do not trust it to be accurate also in terms of the size.

There is a very nice unofficial cutaway picture for HWK-290:

This vision however is more of a two-pilots starfighter, with no space for cargo, no space for passengers, and frankly speaking, spending more than few hours there without  room to stretch ones legs in this one would be a real challenge. Not really a long range starship to me. Judging the scale from that picture, we are in the 15-16 meters size range.

The one below is more like two persons long range craft, measuring approximately 20 meters, but still no place for cargo, and the passengers would have to lie down all the way – possible, but not very practical:

I like the following floor plan more, as it has some cargo space provided:

But the one I liked the most is this one, by Ruakar:

The main cargo hold in this one is not very impressive, and it is doubtful it could provide space for 75 encumbrance units as in the specification, and there is practically no space for the consumables (and 3 months of consumables should have some visible containers to store in), but it is a very good start. And the cockpit is well planned, you can actually stand up and walk between the seats, as shown in the model below:

Having that vision in mind, I have redrawn it for our campaign and tried to establish some reliable scale. I took the size of the bunk bed as a measurement unit, assuming that it should accommodate an average person that is 1.8 meters tall: 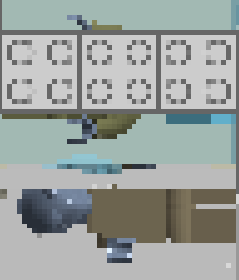 Therefore, if we take that measure, and apply it along the drawing (it is a little bit skewed in the engines part, sorry, it is just a working drawing on the back side of my vehicle sheet), we should get the estimate of the length of 13.5 standard-person units of 1.8 meters, giving a total of 24.3 meters:

That is a pretty long ship, by silhouette 3 standards, but still within the rough size band that we’ve established, and quite slender.

And you might ask, how do we deal with the limited cargo area and the lack of containers for consumables? We add space below the main deck in the fore part of the ship, below the cockpit. As you could see on all the visualizations of the exterior before,  this part is significantly higher, so we have the space we need.

In that project, you can only have two persons sleeping in the bunk beds, there are two comfortable pilot seats in the cockpit (that might be used by the crew to nap in, when needed) and two foldable jumpseats in the cabin’s corridor. There is also a refresher, a kitchenette, and airlock and the cargo elevator. In the cockpit there is enough room to house an R2 unit behind the co-pilot seat.

So we’ve got the answer for the size of the ship.

But is it luxurious?

The Force and Destiny description says it is aimed at high-profile customers. But definitely not in terms or the space you have aboard, as even with the hull of 24 meters it still has that submarine feel inside. You can host 2 passengers, additionally to the default of 2 crew members, but you will rotate for the bunk beds. You can stand up and spread your legs, but not if you are exceptionally high alien. And you can carry your 75 units of cargo, but you will have to distribute it between two holds.

I would say that the luxuries we can reasonably expect are the higher quality materials that all inside is made from, maybe some extra hi-end electronics, like the entertainment system, so you can watch your favourite holomovie during the trip, listen to music or play a game with your friend. There should be high quality food synthesizer, that actually produces something tasty, and the water storage and reclamation system, so you can actually have a real shower on board.

In the next article I will try to walk you through the process of creating a LEGO minifig scale model of HWK-290 based on those assumptions. Stay put.

View all posts by denzuk